A katana is a sword with a curved blade longer than 60 cm fitted with an uchigatana-style mounting and worn in a waist sash with the cutting edge facing up. Sometimes, so that people can have a closer look, the saya can be removed and placed in another ‘slot’ on the katana kake. If this is the case. KATANA KAKE VERTICAL – Discover our sword display stands selection on

So you’ve got a sword and you’re not sure how best to display it.

There are many different styles of stands that are available for your sword for this purpose and its mainly up to you to decide what look is best for you. For katanaa katanakake is used and in fact it can be used for tachi as well. It displays your sword horizontally and can have space for one or many swords depending on how it’s been made. At it’s most basic level, the katanakake is simply a stand, usually made of wood, that has two hook like shapes at either side allowing the sword to be placed safely at rest.

For another type of katanakake, usually found outside the house or establishment for people to leave their swords before entering, go here. Japanese swords are displayed in the manner which they are worn.

For katana, which is usually thrust edge facing upwards through the obi, that is the way that it sits on the stand. The tsuka is on the left which allows the kurikata to be properly shown along with the display knot of the sageo if indeed one has been tied. Sometimes, so that people can have a closer look, the saya can be removed and placed in another ‘slot’ on the katana kake. 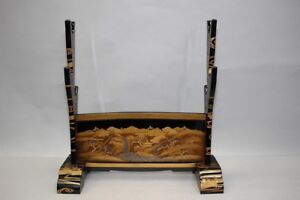 The tsuka of course remains to the left in the same manner as the katana kale be displayed. Some people have said make the position of the tsuka on the left indicates that the owner of the sword feels safe or trusts the people around him and that if the sword is displayed with the tsuka on the right, it means that he feels better knowing that his sword is more readily available to him. I do not know how true this is, but the katana kake certainly became more popular in times of relative peace such as the mid to late Edo period and so not having your sword constantly by your side might make you more concerned with how easy it would be to get to, especially in your own home. The stand might have to on occasion, store the two swords every samurai owned.

When worn or displayed together, these were called the daisho as in big and little sword. The most common way to display a daisho is with the small sword op top and the daito big sword below. Placing the the item you withdraw from the obi in the first slot makes kinda sense. However some do choose to place the daito on top.

There was also another type of stand specifically for Tachi, again using the term tachi kake, that sat vertically on the ground. They were a little shorter in height than the length of the tachi, had a nice flat base at the bottom to allow them to stand steadily and they allowed the tachi to be rested in them. The tsuka of the tachi being the heaviest end, sat at the bottom of the stand in a little indentation to stop it sliding out. The saya was then rested in a little groove at the top of the stand, the base, upright stand and sword, forming a kind of triangle shape.

When placed in a stand like this, the curvature of the blade leaned inwards, with the edge of the blade facing away from the observer. Whichever stand was used to display whatever swords, the quality and decorative quality of both katana and tachi kake varied as much as any other part of the samurai’s belongings.